Determining the location of abnormal sensations of the nose is often difficult and can only be described unclearly by those affected, as many different anatomical and functional interacting systems are involved. They may have their origin in the nose itself (for example inflammations, allergies, malformations of the nasal septum, and nasal turbinates) or also in the area of the paranasal sinuses, nasopharynx, cervical spine or temporomandibular joint. Obtaining information on additional symptoms and examining the nose with an endoscope often helps with the diagnosis. In addition, if a general illness is suspected, a blood sample or an imaging procedure (computer tomogram) may be necessary.
The most common discomfort is a “dry”, sometimes “burning” sensation in the nose. Presumably, climate-related reasons are responsible for this phenomenon in central Europe. In spring, a high pollen count is a factor. A reason in summer can be high ozone levels, however in winter, it is mainly due to the low humidity. Additional factors are hormonal changes, e.g. as occurring during pregnancy, but also in the course of ageing. Also side effects of medications taken regularly must not be neglected as a factor. Here the following applies: Good lubrication and ointments help each time.

The fact that the nose produces secretions is one of the most important prerequisites for a “healthy nose”, but if this secretion differs by the amount, consistency, colouration or smell from normal nasal secretions, then this indicates a disease of the nose or paranasal sinuses. Aqueous secretion occurs in the common cold, but also in case of great nose dryness (Rhinitis sicca, “old age sniffles”), at a hypersensitivity of the nasal mucosa (hyperreactive rhinopathy), during allergies or as a drug side effect. Most of these diseases can be made more bearable on the one hand by nursing measures, on the other hand with the help of nasal sprays, sometimes in combination with tablets. In case of a suspected allergy, we perform a skin test (prick) and advise on the long-term treatment options. A spontaneous liquid and unilateral secretion following an accident with a head impact may also indicate an injury to the meninges (liquor fistula) and must be closed surgically to prevent meningitis. A predominantly mucous secretion occurs in chronic nasal or sinus disease (possibly polyps), upon workplace exposure to toxic fumes or dust, but also often with hormonal changes during pregnancy (pregnancy rhinopathy). If the secretion is coloured, then it is often a chronic inflammation with special pathogens that can be identified with the help of a smear test. If it is bloody, a general disease can be behind it, but also a tumour or a foreign body. In case of a smelly secretion, an affected tooth must always be considered.

Nasal bleeding (epistaxis) is a common and in most cases harmless symptom. Cause may be local factors such as dry mucosa, (rhinitis sicca), “nose picking”, changes in the nasal septum, a cold (acute rhinitis) or with children, even a foreign body (such as a glass bead). But nosebleeds can also be an expression of a general illness, for example, a cardiovascular disease and today are often a side effect of blood-thinning drugs. In rare cases, an epistaxis indicates benign or malignant tumours of the nose, nasopharynx or paranasal sinuses. The therapy depends on the causes and harmless cases often consists in a sclerotherapy of the bleeding vessels after a surface anaesthesia and the consistent application of a moistening or rehydrating nose ointment.
In case of an epistaxis, you should remain upright to lower the blood supply to the head and do not swallow the blood flowing into the throat, in order to reduce the risk of later vomiting and the risk of aspiration. The nostril should be constantly compressed against the nasal septum. An ice pack on the neck (“ice-tie”) causes a reflex vasoconstriction and thus a reduction of the bleeding. Even if the epistaxis can be stopped in this way, a visit to the ENT specialist the next day makes sense, in order to avoid further unpleasant episodes. If the epistaxis is not arrested, then a specialist should be consulted as an emergency during the day; while at night or on weekends the emergency number of the doctor’s office 044 421 21 21 provides information.

Having a “closed” or “stuffy” nose is often not only a significant subjective burden on the person concerned, but often leads to discomfort, headaches and may affect the lower respiratory tract in the long run. If the nasal obstruction is part of the complex syndrome of snoring (ronchopathy), then the bed partner is also affected. In the case of snoring, a comprehensive survey and examination is carried out and a step-by-step therapy concept is developed together with the patient and a referral to a lung specialist is made, in the case of suspected sleep apnoea syndrome (OSAS). The nose can be “always” blocked or only temporarily, completely or only partially, or on one or both sides, which already gives indications of possible causes. Also important is a detailed medical history. For the diagnosis, an anterior and posterior nasal examination (rhinoscopy) is performed by means of an endoscope. If necessary, this examination is supplemented by a special rhinological diagnosis. Thus, the active anterior rhinomanometry allows the air permeability of the nose to be measured. If an allergy is suspected, a skin test (prick test) will be performed, maybe a direct provocation of the nose with the main inhaled allergens and possibly a blood test. A subjective smelling test concludes the diagnosis.
The causes of nasal obstruction can basically be “organic” or based on a malfunction. Very often there are changes in the shape of the nose and nasal septum, which prevent free breathing through the nose. Sometimes it is sagging nostrils that are “sucked in” during breathing, or constitutionally narrow nostrils (valve stenosis), or sometimes a curvature of the nasal septum (septum deviation), or large nasal concha (concha hyperplasia, concha bullosa) or even polyps. However, especially in children and adolescents, the cause may also be in the nasopharynx (for example, enlarged tonsils, adenoid hyperplasia). Depending on the underlying causes of the nasal obstruction, but also on the intensity of psychological strain, a therapy concept is developed that includes both conservative and surgical options.

Pain and/or pressure over the paranasal sinuses, “persistent cold”

Basically, there is no clear distinction between a common cold (rhinitis) and sinusitis (rhinosinusitis). All of us have already experienced how we suffer from a cold and sometimes more, sometimes less pressure, or even pain over the jaw (maxillary sinus), eyes (ethmoid) or forehead (frontal sinus). Often these are viral and sometimes bacterial infections and can be treated conservatively with decongestant nasal drops or sprays, inhalations with camomile or sage, herbal medications or decongestant pain relievers. For severe forms associated with fever and severe impairment of the general condition, the use of antibiotics may be considered. If the patient does not want to take strong medication – for example, during pregnancy – the ENT specialist can carry out a daily cotton swab with decongestant medication to improve the drainage of the paranasal sinuses. We speak of acute rhinosinusitis if the symptoms last no longer than twelve weeks. If symptoms persist even after this time, such as a blocked nose (nasal obstruction), flowing nose (rhinorrhoea), a reduction in smell (hyposmia, anosmia) or pain, or pressure in the facial area, we speak of chronic sinusitis. At least now, a visit to the ENT specialist is necessary, who, on one hand carefully examines the nose and initiates further investigations (smear test, blood test to rule out an immune deficiency disease, etc.) and possibly carries out an additional diagnostic assessment by computerised tomogram and finally suggests and begins a suitable therapy for the cause. This will be local, systemically medicinal or surgical, depending on the case.

An olfactory disorder can be extremely stressful for a patient. Especially if it occurs suddenly and if it concerns not only the private enjoyment, but also the professional skills, as in the case of a cook, a “Master of Wine” or a parfumier. Suffering from an olfactory disorder not only means “you can not smell with your nose any more”, but it also means that the food itself becomes “tasteless”. A schnitzel “tastes” like cardboard, a Bordeaux like a Burgundy and coffee like dishwater. It is astonishing that people who were born without or with a reduced sense of smell are characterised very little or not at all by this impairment, and this deficiency is often noticed by accident. It is quite different with an odour loss that occurs suddenly, for example, after an operation or a craniocerebral injury. We all know the beautiful sensation after a long cold, when the sense of smell slowly returns. It’s usually like that, but not always. After viral infections it can lead to a persistent, possibly permanent restriction (hyposmia) or even to a loss of the sense of smell (anosmia).
Fragrances are perceived via the olfactory epithelium in the nose or retrograde via the pharynx and directed via the olfactory nerves into the brain. This pathway may be disturbed by changes in the mucous membrane (for example in old age), by obstructive processes (for example nasal polyps), but also by so-called “central” diseases (for example Parkinson’s disease, brain tumours). Not infrequently there are also medically induced olfactory disturbances. The basis of the diagnosis is the discussion and a precise ENT examination, combined with an odour test.
The therapy depends on the causes.

Due to its exposed position, the nasal pyramid is prone to fractures. Often, a broken nose is accompanied by heavy nosebleeds (see Epistaxis Emergency Measures). It is important to undergo an ENT exam to determine if there is a tilting of the external nose present, but also to assess whether the nasal septum is damaged (septal fracture) or if there is bleeding under the skin covering the cartilage (septal haematoma), which could inflame (septal abscess) and later in the worst case lead to the caving in of the nasal bridge (saddle nose). In this case, immediate surgical care is to be performed. Due to soft tissue swelling, it is sometimes difficult to assess immediately after an accident whether the nasal bone has been displaced and must be straightened for cosmetic as well as functional reasons. In this case, wait and reassess the situation after 5–7 days. In the meantime, do not blow your nose. Nasal breathing can be improved by using a nasal spray. 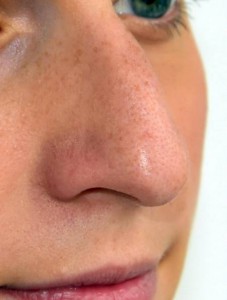